Your gut bacteria are actively involved in your emotions, how you think, and even behave 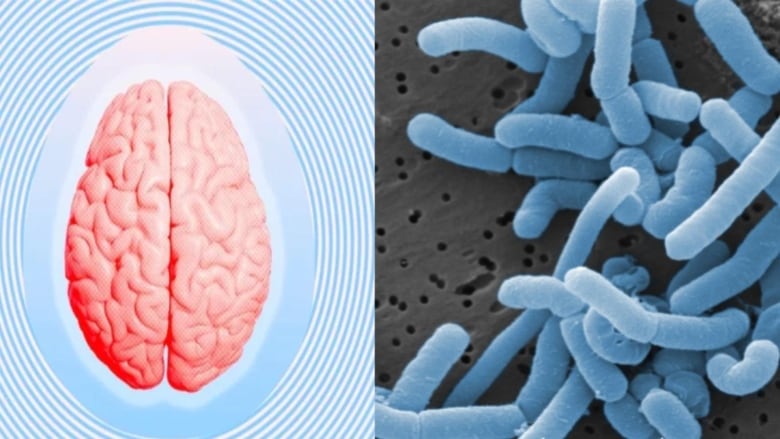 Bacteria in your gut could be influencing your mood and how you think (Sarah Claydon/CBC/Dr. Horst Neve/Max Rubner-Institut)

We're familiar with the idea that the state of our bellies can affect our brain, but you might be surprised to find out that this goes way beyond the idea of getting "hangry."

Our gut—or more specifically, all those little bacteria that live in it — can profoundly affect the way our brains work in many ways. Scientific research that's been picking up a lot of traction in recent years is starting to hint that our gut bacteria, otherwise known as our microbiome, is an active participant in our emotions, how we think, and even how we behave.

Recent human studies have demonstrated a strong link between the gut and the brain. One study of individuals in Belgium and the Netherlands showed that in depressed people, two groups of gut bacteria were consistently less common. Another study found that a group of people who'd consumed probiotic-rich yogurt had a decrease of activity in an area of their brain that resulted in them being more calm, cool, and collected.

Quirks & Quarks host Bob McDonald spoke with Dr. John Cryan, a professor and chair of the Department of Anatomy and Neuroscience at University College Cork in Ireland who came to this field as a stress neurobiologist, about this fascinating area of research.

Bob McDonald: What was the first bit of strong modern evidence that made you realize that there is a connection between the gut in the brain?

Dr. John Cryan: We started looking at how, in an animal model, early life stress is having an effect on the entire body. One of the things we found was it was affecting gut physiology and gut barrier function.

We also found that when we looked at what was going in the composition of these microbes, we found that there was a change in the diversity in adult animals that had been stressed in early life — that there was a signature of this trauma that persisted in the microbiome.

Then we found this paper that had been out already for five years, but it had more or less been ignored, from Japan where they had taken these germ-free animals that grow up in a bubble that never get exposed to microbes, and lo and behold, they have an exaggerated stress response. So that tells us that the microbiome is important for how stress is gated.

The next part of that puzzle then was, could we target the microbiome by some ways to dampen down the effects of stress? And together with some Canadian collaborators, we did some experiments to show that a single strain of bacteria, when given to mice, could dampen down their stress response quite dramatically.

What I've come to really understand is that there is no limit really on what aspects of emotion could be modulated by the microbiome.- Dr. John Cryan, University College Cork

Now you talk about stress being affected by the microbiome. What other emotions can it affect?

What I've come to really understand is that there is no limit really on what aspects of emotion could be modulated by the microbiome. We still need more evidence to really tease that apart.

If the microbiome can affect our social interactions and our stress, what about how we think — our cognition?

JC: Yes. Studies in animals first showed that when we give certain strains of bacteria, we could modulate working memory in a variety of tasks. So we could see how the animals were actually learning and able to remember things.

We've done some studies in humans, although it's early days, but we have looked at certain ways we could also show there is a cognitive change using brain EEG. When healthy volunteers had taken this bifidobacteria, and we looked at their EEG signal, there was a discrete signature in what's known as their theta waves. We don't know what that means, but it is interesting.

Well if the association between the microbiome and the brain is as strong as you think, how close are we to treating problems with the brain, like emotions or stress, using probiotics or fecal transplants instead of drugs like Prozac?

JC: It's hard to know how far out. We've coined the term psychobiotic to be basically a targeted intervention to the microbiome that supports mental health.

We're very enthusiastic about prebiotics, because prebiotics are basically the fibres and sugars on which the beneficial bacteria use and thrive on. And that's really really exciting.

With fecal transplants, I don't really know if it will ever be used mainstream in treating a lot of mental illnesses that Prozac would. We've done a study in animals where we've taken depressed human microbiome and transplanted it to animals and been able to basically transfer the blues. And that gives us great confidence that there's something in the microbiome that is changing the entire physiology of an animal. And then with fecal transfers, that's been one pilot study in autism, which has been very promising. But we need to be cautious and we need a lot more data in relation to that. 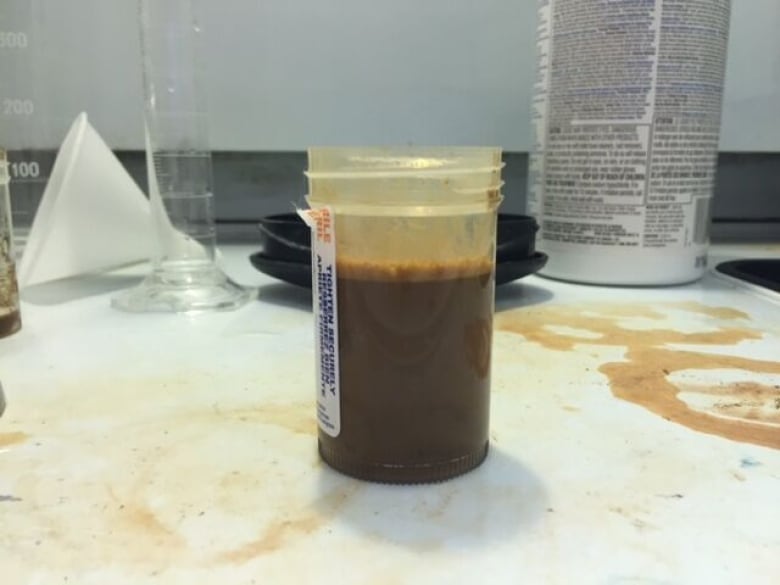 Fecal transplants can transfer bacteria from one host to another. (Maureen Taylor)

The big issue with probiotics is "buyer needs to beware" because a lot of what's being sold both in Canada and in the U.S. has never had proper validation and there's a lots of snake oil out there, if you want. I would always urge people to look for evidence before they embark on such things. 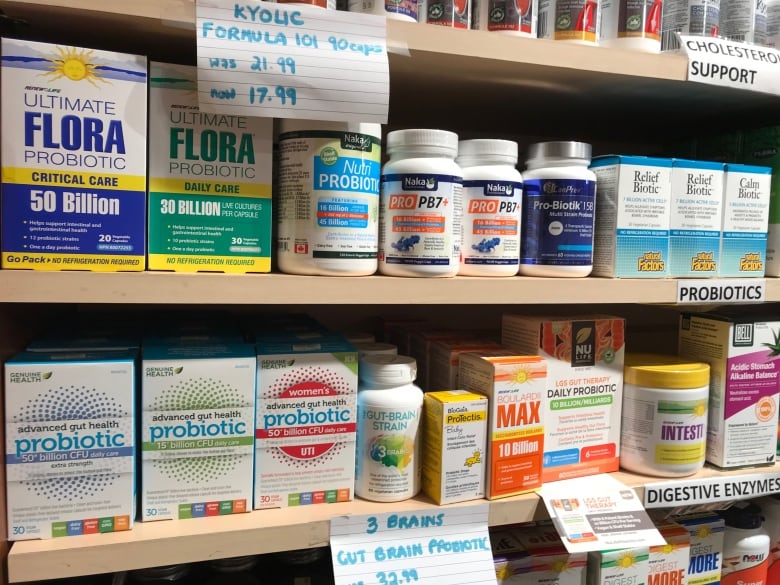 Probiotics companies are tapping into genuine excitement from scientists about the power of therapeutic microbes, but unfortunately, the science isn't there yet to support most probiotic claims. (Sonya Buyting / CBC)

But the other area that I'm interested in and I think will be very important is the diet itself. Because the biggest factor to influence the composition of the microbes is the composition of the diet. And really exciting work from Australia has shown that a mixed Mediterranean diet will help people who have depression on top of their medication or psychotherapy. And I really think that's being mediated through the microbiome because many of the components of this diet — polyphenols and omega 3 fatty acids —for example, are all affecting the microbiome. 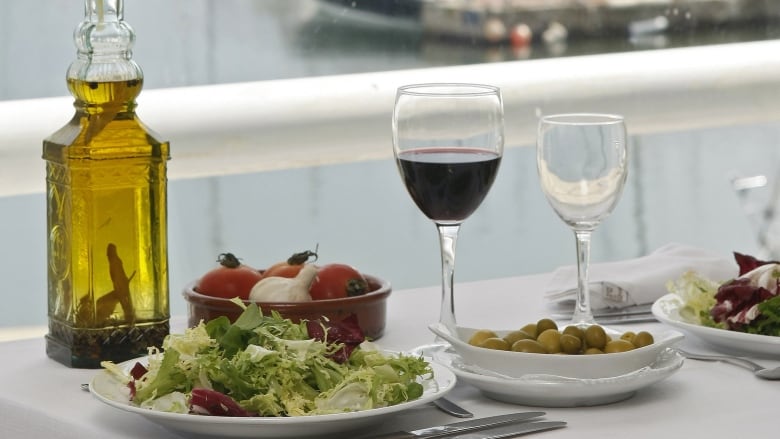 The Mediterranean diet is good for your gut and brain. (Albert Gea/Reuters)

And then there's a whole area fermented foods, which we're starting to work on now in our animal studies. And it's really promising — the fact that this could be a really good way of just bolstering the microbes you already have. 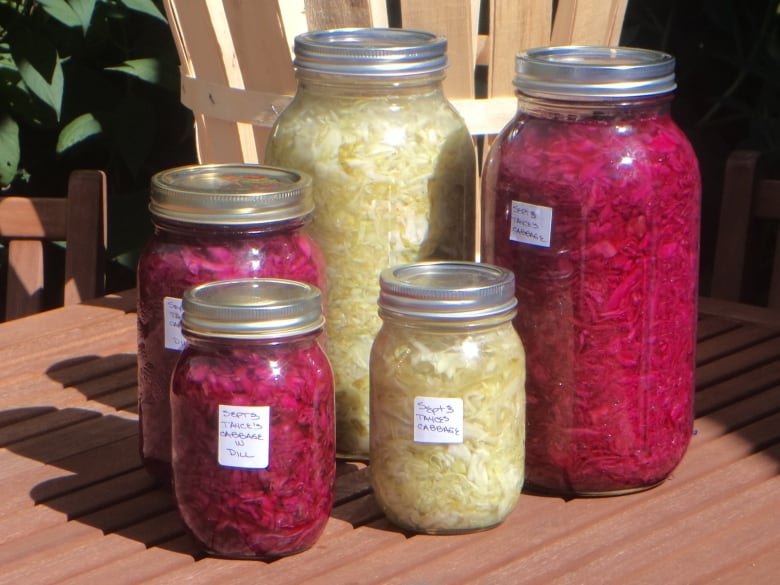 The bacteria in your gut love fermented foods. (Ruth Merrett)